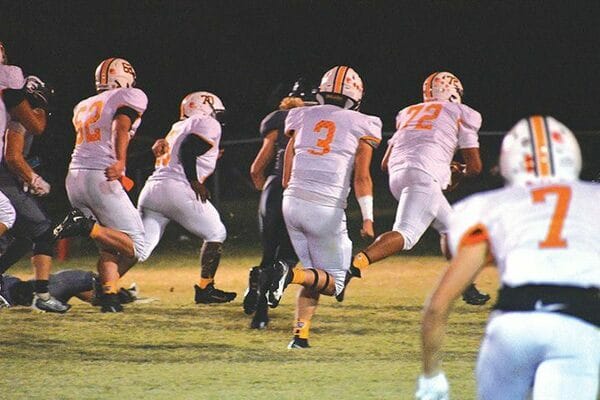 Dauntae Keys (72) gets the scoop and score after an Eastside fumble. PHOTO BY STEPHEN KING 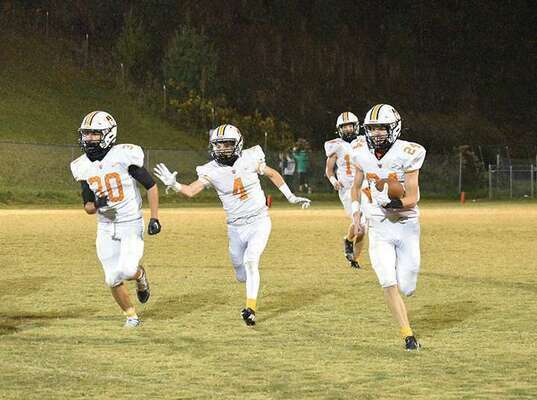 Burton’s Ian Tate has plenty of blockers ready to take down any would-be tacklers. PHOTO BY STEPHEN KING 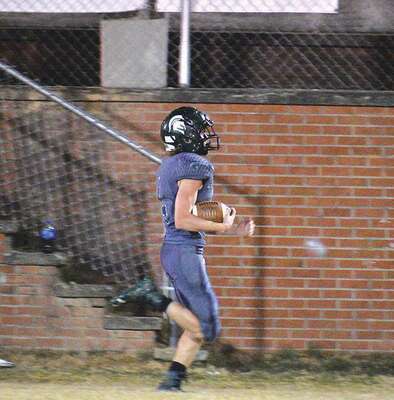 Nick Ward runs this kickoff back over 90 yards for a touchdown Friday. PHOTO BY STEPHEN KING 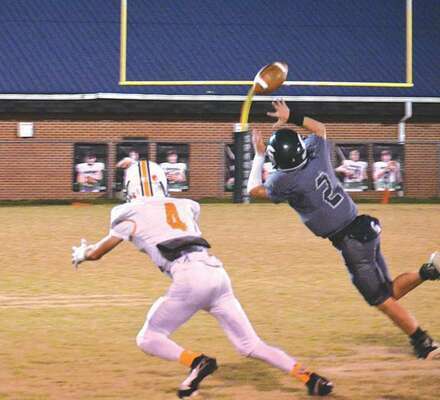 Eastside’s Payton Adkins gets a hand on the ball to break up the pass. PHOTO BY STEPHEN KING
Previous Next

COEBURN — Burton rolled into Eastside Friday night like a hurricane. Despite the threat from Ian, the Raiders were all business on both sides of the ball, taking a 50-21 victory over the Eastside Spartans at Carl McConnell stadium.

After a 1-2 start against non-conference foes, the Raiders have moved to 2-0 in district play and have outscored their last two district opponents 101-37 behind a potent offense and stifling defense.

"We executed in all three phases of the game tonight. We came out flat to start, but the boys stepped it up, and got the win. All the credit goes to our players and coaching staff," Burton head coach Jacob Caudill said after the game.

"That's a stellar football team. They’ve got speed and they're physical. Our boys played good the first half, but Burton was fresher than we were. Our boys fought tooth and nail all night. Burton is a good team that is going to win a bunch of games this year," Eastside head coach Mike Rhodes said.

The Raiders’ Trey Keys had three touchdowns on runs of four, three and 49 yards on the night, racking up 151 yards rushing on 14 carries. Brayden Dutton was also potent on offense adding 75 yards on the ground, 62 receiving yards and a touchdown. Quarterback Noa Godsey was 12 of 16 for 137 yards and had a touchdown pass to Ethan Hawk. He also had 20 yards rushing on 6 carries.
In the second quarter, Raider linebacker Holden Hutchinson delivered a big hit on Spartan quarterback Payton Adkins, knocking the ball loose. Burton defensive end Dauntae Keys scooped up the ball and went 28 yards for a touchdown. Hutchinson added a sack, as he was in the Spartan backfield all night. Ethan Hawk and Lucas McClain had 5 solo tackles each for the Burton defense.

DJ Buchanan added a touchdown for the Raiders to round out their scoring on the night.

The Spartans (0-1, 0-6) got a 13-yard rushing touchdown from Adkins in the second quarter. They wouldn’t score again until the fourth when Dayton Stanley ran one in from the three-yard line. In the final score of the game, Eastside’s Nick Ward fielded a kickoff and ran it back 91 yards for the score.

Friday, the Spartans travel to Clinchport to take on the Rye Cove Eagles in a key district match up. The Raiders will travel to Lee County to take on the Lee High Generals in a non-district battle.

Don’t tell me I can’t: Caitlyn Ross is not quit...