Broken records: Emmah McAmis is living up to and hoping to surpass family legacy 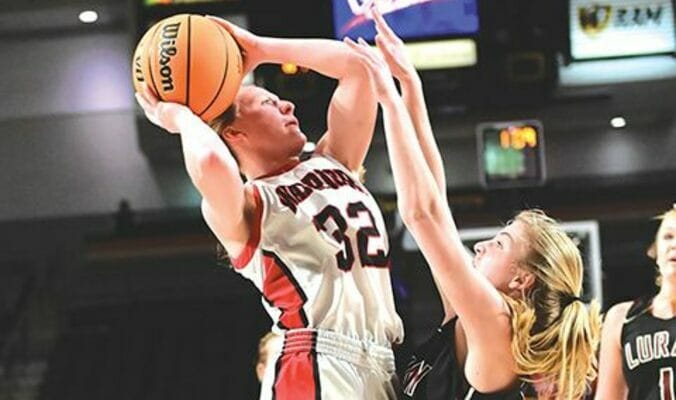 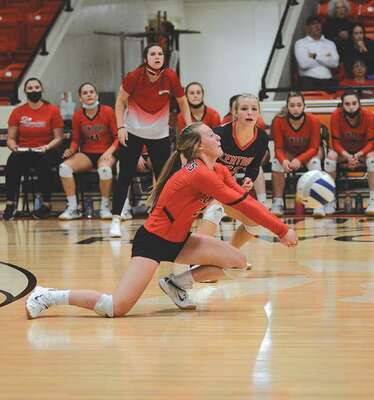 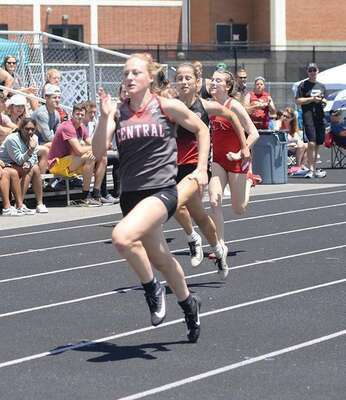 In volleyball, she helped lead the Lady Warriors to their first state tournament appearance since 2012.

Moving on to spring, she would go as far as earning all-state honors with a top eight finish in the 100- and 200-meter dashes.

But, anyone who knows Emmah McAmis knows that is not enough. Her expectations for herself demand a closer rendezvous with perfection. No problem. She has the instinctual work ethic to get it done.

Emmah got started in sports early, attending the Warrior boys’ varsity basketball games and camps with her brother Isaiah and father T.J, who was the head coach at the time.

“Some of my first memories are of growing up and watching my brother play and always watching Dad coach,” Emmah said. “I definitely fell in love with it.”

Both seemed to have influenced her so deeply that she adorns their number 32 on the court. But, according to T.J., the number is a family affair.

“One of my cousins wore it first. Then another first cousin (wore it) and then I started wearing it,” T.J. said. “When I started coaching, I coached some other Dotsons (cousins) who wore 32. Our cousin Casey Dotson (senior athlete at Central) is also wearing it now.”

It seems the largest part of the McAmis clan has played or is currently playing or coaching sports. Isaiah now plays basketball at UVA Wise and sister Hannah plays volleyball for the Cavs. T.J. was a three-sport star at J.J. Kelly before playing basketball for Clinch Valley College (now UVA Wise). Her aunt Angie McAmis Duncan played softball and volleyball and is now the girls tennis and JV volleyball coach. Her aunt Bobbi McAmis Mullins earned multiple accolades including a state championship in tennis as well as local honors in basketball. Bobbi also earned the district tournament MVP on VHSL Hall of Fame coach Robin Dotson’s first district championship team as well as being an assistant coach on Dotson’s first state championship team.

“Growing up, I’ve always heard stuff about and been around my family members and I always played around with my cousins,” Emmah said. “Being competitive was always a thing. No one ever went easy on me. And as the youngest, I’ve always wanted to beat them. It’s always inspired me.”

Emmah dabbled in just about every sport growing up, but quickly identified basketball as her favorite. That didn’t stop her from picking up a volleyball for the first time in middle school. The Lady Warriors are sure glad she did.

“Emmah has always had this certain fire about her,” Lawson said. “She's a natural athlete and loves to compete. She plays with so much intensity and it's fun to watch an athlete like her play.”

Emmah posted a team-high 51 service aces, 441 digs and 513 kills on her way to first team all-district, all-region and second team all-state recognition. She completed all of this after a year off as she was unable to play her last year on junior varsity due to choosing to hold back.

“She asked if she could practice with the varsity team that year. She practiced with us all that season working to better herself. Right before our first game last year, she said ‘coach this is what I've been dreaming of,’” Lawson said.

“I guess I’m just comfortable being a natural leader. I just want to be on good terms with all of my teammates as well as being a good teammate to them so we can go out there and get it done,” Emmah said.

In multiple interviews given to the press, Emmah never hesitates to point out the senior leadership on her teams and how much that has helped her grow in her first high school season.

“In volleyball, Bayleigh Allison was definitely someone who helped me a lot,” Emmah said. “Anytime I would get down on myself, she was always the positive one. She would pull everyone back and help us not to get so frustrated.

“During basketball, I would definitely say Jill Sturgill. We stuck together the entire year and we got really close during the season. She taught me a lot about what it takes to be a leader. They were both really great to me and the rest of the team this year,” she stated.

The athletic requirements in volleyball only served to prepare her physically for the basketball season while the success whetted an appetite for a lot more of the same.

The Lady Warriors had an average start, but as the season went along and the team began to gel together more, success started to happen.

“When we first started, we had never played together as a full team,” Emmah said. “Everybody was at camp and practice at different times, so that made things hard. But, as the season went along, we got more comfortable together on the court. We all grew together.”

The Lady Warriors were on a winning streak and had all the momentum behind them moving from the last of of the regular season into the postseason. They won the Mountain 7 tournament and the Region 2D tournament on their way to the state tournament and finally, the championship game. But, the game against Luray at VCU’s Siegel Center was no walk in the park. The Lady Warriors went into the fourth quarter down by 10 points. Emmah decided it was time to regroup.

“Nobody was ready to give up and I just thought to myself about how far we’d come. I was not about to lose this game,” Emmah said.

The Lady Warriors started to chip away at the deficit and a few things bounced their way. The Warrior strong in the crowd started to get more vocal and according to Emmah, the student section that attended was “amazing.”

T.J. remembers a key play that may have possibly gone unnoticed. The Lady Warriors had changed up their formation into more of a pressure defense. With time ticking away and around half of the last period gone, Luray attempted to get the ball to their star player, Class 2 player of the year Emilee Weakley. McAmis saw the potential, set her feet and braced for impact.

“It just so happened to be Emmah who was in the middle of the court. When they passed the ball to (Weakley), Emmah took the charge. That was her fourth foul and they immediately took her out of the game. The momentum shifted immediately and they put her back in about a minute later, but it had already shifted our way,” T.J. said.

With less than 30 seconds remaining and the Lady Warriors down 59-57, Emmah made another key defensive play that coach Dotson feels is a big contributor to the victory.

“Emmah tied up Weakley to force a jump ball. That was when we gained possession to set up that play,” Dotson said.

In the ensuing time out, Dotson chose the play. When it came to figure out who was going to take the shot, the consensus amongst teammates was Emmah.

“I thought, “Oh, wow, they really believe in me.’ That gave me a lot of confidence going into the play,” Emmah said.

The ball did indeed end up in her hands and she took a jump shot from just inside the foul line in the middle of a Lady Bulldog triple team. She felt the contact and heard the whistle, but still felt good about the ball as it came out of her hands.

“It went in and everyone went crazy,” Emmah said. “I just knew we’d won at that point. I had faith. It was definitely a moment I will never forget.”

She then completed the three-point play to give the Lady Warriors their first lead in the second half. Luray took a shot on their end, but missed. The ball came back to Emmah who was fouled and sank two more free throws to end the game.

Completing the postgame press conference, a member of the media made her aware that she had set the VHSL record for points in a season as a freshman at 683. She was not prepared for the news.

“We were in the press conference and that’s when they told me,” Emmah said. “I had absolutely no idea. I was in complete shock just sitting there thinking it was just crazy.”

Despite all of the honors, Emmah never loses site of what’s important and maintains a team-first attitude.

“I guess players aim for getting those records, but overall, I was just there to win a state championship with my team,” Emmah said.

Moving forward into the spring season, Emmah decided there were more records to break. But first, she had to get her running form down after an extended basketball season.

“In the first of the season, I was not running well at all. I went to coach Jason (Mullins) and coach Compton to get some advice. I hadn’t practiced much and I was very frustrated. But, once I started finding some time to work on it, it got better.”

After a lack of victory at the Mountain 7 meet, Emmah moved on the Region 2D meet with the intent to do something great.

“I was really upset when I didn’t win the district,” Emmah said. “So, I was telling myself I was going to go in and win the region. I wanted to run a 12.6 (in the 100-meter dash) because that’s what I’ve been aiming for all season. It came up on the screen and we just started celebrating and going crazy.”

Emmah didn’t know she had done as well as she had in the 200-meter run until it was announced that she had broken a second record on the day.

She also fared very well at the state meet, coming in fourth place in the 100-meter run that had the first photo finish on the state level in quite awhile. The preliminary results had McAmis as winning, but after review, Emmah was bumped to fourth. The top four runners were separated by only three-hundredths of a second.

Now moving into her sophomore year, Emmah is far from finished with the record book. She has her sights set on not only breaking older records, but to break her own as well.

“Just because I had a good year doesn’t mean that I’m done,” Emmah said. “I still have three more years. I’m just going to continue setting new, higher goals for myself.”