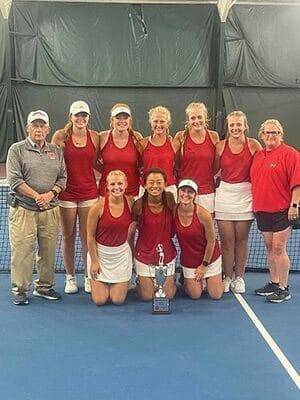 The Central girls tennis team took a giant leap toward getting back to the state championship game Friday. With a 5-4 team victory over John Battle, the 2021 Class 2 state champion Lady Warriors earned the Region 2D championship. They will host Floyd county on Friday, June 2.

The fourth, fifth and sixth seed matches went to John Battle as Makenna Powers, Angelina Hughes and Ella Taylor fell in straight sets to the Lady Trojans. The victor of the match would then be decided in intense doubles competition.

Meade and Mullins pulled out a victory over McKee and Jenkins in a best-of-three matchup, 6-4, 3-6, 6-2. The third seed matchup went to John Battle as M. Smith and A. Smith were victorious over Hughes and R. Taylor 6-1, 6-0.

The Lady Warriors would secure their victory in the No. 2 seed match up as Stafford and Powers took down Reedy and Kreutzer in comeback fashion. After dropping the first set 2-6, Stafford and Powers recovered to take a 7-6 (4) tiebreaker second set. The used this momentum to power through the third set, taking a 6-3 victory and with that, the Region 2D championship title.

Broken records: Emmah McAmis is living up to an...