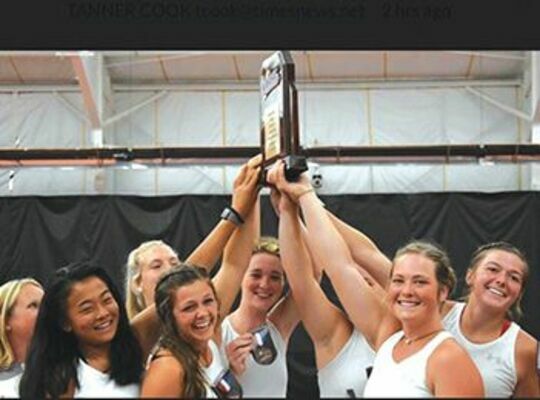 The Lady Warriors are victorious! 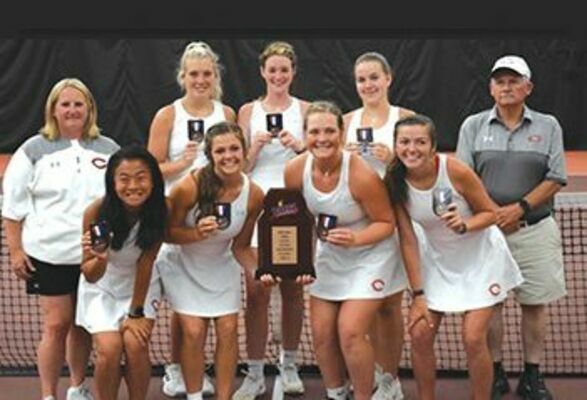 The Lady Warriors celebrate winning the first tennis championship in school history after the Class 2 finals at Virginia Tech.
Previous Next

On Thursday, June 10, the Central girls tennis team followed a dynasty of tennis excellence by adding the school’s first tennis state championship to an already illustrious collection that started with the J.J. Kelly Indians. They defeated Poquoson 5-0.

Head coach Angela Duncan took over the helm of the Lady Warrior tennis program in 2016 and since the school’s inception, they have been the runners-up for the championship in 2015, 2016 and 2017. This current team which consists of Hannah McAmis, Tellie Stafford, Kally Hughes, Sydney Linkous, Jaida Meade, Abby Duncan and Kylee Mullins made it all the way to the state quarterfinals before falling to Radford 5-1 in 2019.

“This win and this team are simply special,” coach Duncan said. “It was fun to coach alongside my dad and see all these players grow both on and off the court.”

Tennis at J.J. Kelly/Central has always been a family affair for Duncan. Her aunt, Janet Nelson, coached the team from 1993-1997 and her sister, Bobbi McAmis Mullins, was on three teams who played for the state championship in (1990, 1991 and 1992). Now, she coaches her step-daughter (Duncan) and niece (McAmis) in continuing the family tennis tradition.

Last year COVID-19 eliminated the chance for Central to potentially head back to state, and when this season started, they were already behind with a lack of practice sessions.

“Hannah was in the regional volleyball tournament, Tellie and Kylee were in competition cheer and Kally ran in the state cross-country meet,” coach Duncan explained. “But, even with the late start, I knew this group brought experience and knew how to compete.”

Top-seeded Hannah McAmis is no stranger to state championships, having been a part of two championship basketball teams in her freshman and sophomore years.

“It’s every high school athlete’s dream,” McAmis said. “It was absolutely amazing being able to represent this program and bring home Central’s first tennis state championship. Being able to say I’ve won in multiple sports really is a dream.”

“Coming from playing three other sports, Hannah simply knew what it meant to compete,” coach Duncan said. “She faced tough matches all year, but she never failed by trying to outthink and outplay her opponent.”

Tellie Stafford represented the Lady Warriors in the second-seed capacity and completed the regular season with a 5-1 record in match play. Stafford’s team win made her second state championship of the year as the competition cheer team brought home their first Class 2 trophy after only three years of competing.

“Having this be my second one this year was one of the best feelings in the world,” Stafford said. “We knew that all the hard work we had put in the last four years had finally paid off.”

“Tellie already knew what it meant to perform under pressure,” coach Duncan said. “We really saw that in the state finals when she got down 0-4 in the first set and came back to win 7-5, 6-0.”

Kylee Mullins was also part of the championship-winning competition cheer team and was the seventh-seed alternate for the tennis team.

“I’m super grateful for the experience and to be alongside my team as they brought home the state title,” Mullins said.

Duncan spoke of an important role that Mullins played in the Region 2D semifinals which helped the Lady Warriors make it to state.

“Tellie rolled her ankle in warmups, so Kylee had to jump in there at the No. 2 seed. She competed so well for us,” coach Duncan said.

Kally Hughes made an appearance in the VHSL Class 2 cross-country meet as part of the Central team before moving on to an undefeated 6-0 season in the No. 3 seed position.

“There’s no better feeling than winning state,” Hughes said. “We had the goal going into the season and we knew we could get it done.”

“I knew Kally had endurance and a competitive edge coming off cross-country,” coach Duncan said. “She had some of the longest points in her matches, but I could always trust she was going to finish it.”

Sydney Linkous finished the season with a perfect 6-0 record as the Lady Warriors’ fourth seed.

“It was an amazing experience to see our hard work pay off and earn a state title, especially after such a difficult year with many challenges from the pandemic,” Linkous said.

“Sydney is a fighter who will not give up,” coach Duncan said. “She also had long points, but she stayed calm and focused through them all.”

Jaida Meade was not intimidated being the underclassman on a team full of seniors. She also finished her year as the Lady Warriors’ undefeated at 6-0 in the No. 5 seed spot.

Meade spoke about the camaraderie she has experienced with her fellow players.

“It feels great to win state, especially as a sophomore,” Meade said. “I’ve become close with the girls on the team and I’m sad to see them go off to college. But, I’m excited to see what next year’s tennis team will be like.”

“Jaida lost her freshman year due to COVID-19, so it was excited to see her grow as a tennis player as the season developed,” coach Duncan said.

Abby Duncan was another stalwart on the team, posting an additional undefeated 6-0 record as the team’s No. 6 seed.

Duncan was appreciative of the experience and support she has received.

“Winning state was definitely the most memorable and rewarding feeling in the world,” Duncan said. “As a team, we worked hard no matter the circumstances. I’m so thankful I got to share this experience with my wonderful coaches, teammates and everyone who supported us throughout the years.”

“Abby had improved so much from the previous year, especially her serving and hitting,” coach Duncan said. “It was fun to see her grow as a tennis player this year.”

It was no surprise to see all six players awarded all-Mountain 7 honors after the season was complete. With five seniors graduating, coach Duncan will look back with fondness on the 2021 championship season and the players who brought home the gold.

“They are a special group that I’ll always be so proud of,” coach Duncan said.

Woods marker goes up at gap