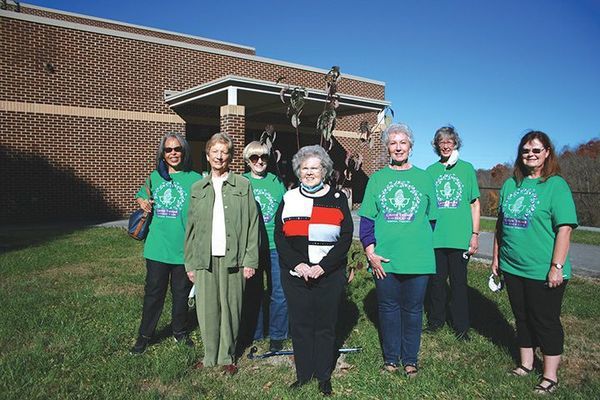 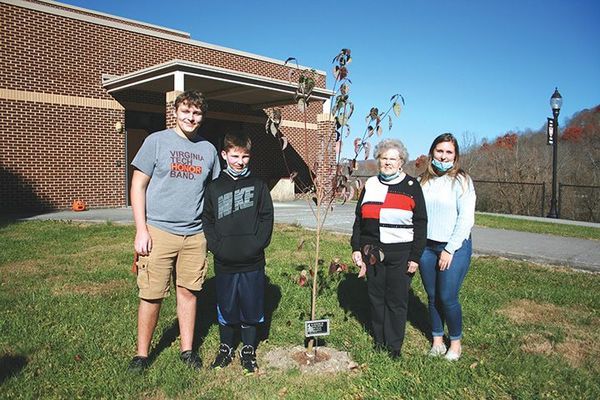 On November 8, Green Thumb Garden Members acknowledged June Jones 50 year membership by honoring her with the planting of a tree.

A Cherokee Princess Dogwood tree was planted in her honor. A dogwood tree was chosen as it is the state tree of the Commonwealth of Virginia. She was the first garden club member to be honored in this manner. June has been active in the garden club, in the community, and retired from the Norton City School System. She always has time to help others. The tree is planted outside the Norton Elementary and Middle School. It has a plaque with her name on it at the base of the tree.

June and her family moved to Norton in 1968 from Northern Virginia. Her sister, Connie Burgess, was a member of the Green Thumb Garden Club and invited June to join the club. The sisters represented the club at city council meetings and were assigned jobs by Christmas Parade Chairman Vic Jones.

June has represented the club in many capacities throughout the 50 years she has been a member. She was president in 1988-90, and also served as registrar of the Southwest District when Bibbie Fraley was district president.

June has been active in state and district levels of the Virginia Federation of Garden Clubs and was awarded a VFGC Life Membership in 1976.

She continues to educate club members by sharing her knowledge of gardening. She has headed up flower exhibit at the Virginia-Kentucky District Fair since 1982. She and her children and grandchildren participated in picking up litter during Keep America Beautiful which has always been important to June. Planting flowers and weeding was also a popular job at the cannon in front of city hall. June has been Arbor day chairman several times. The club has planted trees in many different locations around Norton, also replacing dogwoods after the tornado hit the museum in Big Stone Gap.

June enjoys hosting the club, a tradition since 1993, at her home each August so they can view her beautiful garden. Planting annuals that require little maintenance is her favorite.

June noted that Charter member Louise Witt has more membership longevity. Louise was one of the organizers of the club in January 1950. She lives in Kingsport, TN with her daughter, Laura. She is 99 years old, very attractive and enjoys hearing from fellow garden club members. Before the corona virus June, Louise and some members met once a month for lunch.

The current president of the Green Thumb Garden Club is Carol Moore. She is a hard working visionary who keeps new projects on the agenda. June is not a very active member now but still enjoys attending meetings, hearing about the projects and giving encouragement. The president presented June with roses at the last meeting. 50 years and still eager to learn about gardening.

It is with collaboration of Shelly Knox, City of Norton City Parks and Recreation Director and Rebecca Iozzi that the tree was planted.

The garden club meets the second Thursday of each month at 6 p.m. We welcome all persons to attend.

Mullins recalls a memory of his ‘carton tree’

Search is on for missing woman