Williams family is UVA Wise 2020 Benefactor of the Year 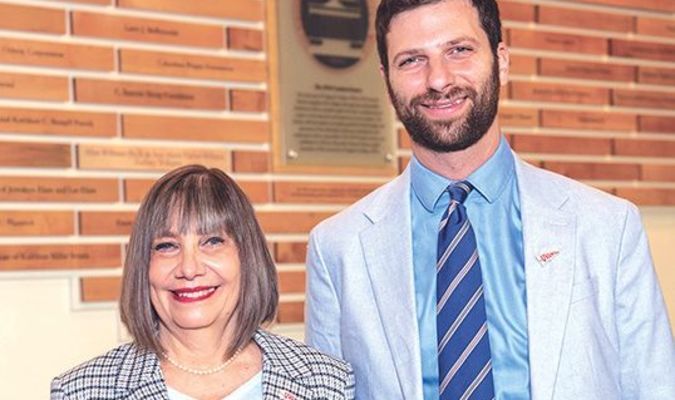 Ann Marie Fischer Williams and her son Zachary A. Williams.

The University of Virginia’s College at Wise honored Dr. Allan T. Williams, Ann Marie Fischer Williams, and Zachary A. Williams as the 2020 Benefactor of the Year for establishing a generous scholarship to help students in need.

“The Williams family made an extraordinary gift to the College at Wise this spring,” Chancellor Donna P. Henry said in the virtual announcement held in the David J. Prior Convocation Center. “They contributed $1.2 million, which qualified for a $1.2 million match from the University of Virginia for a gift equivalent of $2.4 million.”

The Fischer-Elseg-Williams Bicentennial Scholars Fund was created to provide need-based scholarships to worthy and deserving undergraduate students attending UVA Wise. The family hopes the fund will be a source of support for students who find themselves in difficult circumstances.

The scholarship honors Mrs. Williams’ uncle Paul Fischer, her parents, Frank Fischer and Rose Elseg Fischer for their remarkable achievements as children of immigrants who came from Croatia and Hungary in the early 1900s. Mrs. Williams’ parents were engaged in their community of Norton, including starting the local blood bank and were active in the Norton Lion’s Club.

Mrs. Williams grew up in Norton and attended UVA Wise for two years before transferring to East Tennessee State University to earn a degree in social work. She devoted her career to serving as a sales and marketing executive, healthcare consultant, government relations, and serving as a lobbyist with a focus on managed care. During her career in health-related industries, including mental illness and medicinal marketing, she was strongly dedicated to supporting programs that champion those who struggle with substance abuse issues, especially in young adults.

She treasured her time at UVA Wise and recalled the influence Professor Catherine Mahony, Professor Stan Willis, and others had on her as she spent time in the classroom and around campus. She also honored her dear friend Debra Bledsoe Wharton, with whom she developed a lifelong friendship during College, for her contributions to UVA Wise. Wharton serves as the UVA Wise Senior Director of Institutional Events.

“It was amazing,” she said. “I would have stayed all four years if I could have continued with the social worker program here. I received a well-rounded education here because the professors took a special interest in the students. We were not numbers at UVA Wise. We were individuals.”

Zachary A. Williams earned a bachelor’s degree in political science and homeland security from VCU and is working on a certification in cider production from Washington State. He has also served as a legislative aide in the U.S. House of Representatives.

Chancellor Donna P. Henry held a small dinner in September for the Williams family to thank them for their generous gift.

A Christmas Carol: The Barter Players make a vi...