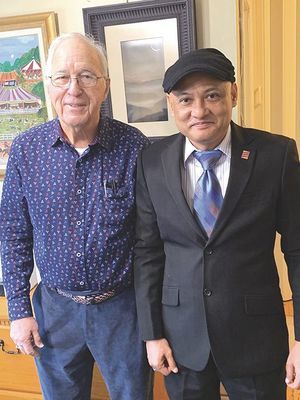 Don M. Green, CEO of The Napoleon Hill Foundation and Mohammad Azhar Abdullah who has become the most recent licensee owner for the Foundation’s global outreach in Indonesia.

The first week of March, The Napoleon Hill Foundation, located on the campus of The University of Virginia’s College at Wise, hosted Mohammad Azhar Abdullah who has become the most recent licensee owner for the Foundation’s global outreach in Indonesia.

Mohammad Azhar was inspired to achieve the goals and wishes of Mr. Jokowi Widodo, current president of Indonesia. He hopes that by sharing Napoleon Hill’s philosophies in Indonesia, he can support and better facilitate Widodo’s plans to transform the growing country’s advancing economic growth and influence.

“We are very ecstatic to have Mohammad on board with us,” says Don M. Green, CEO of The Napoleon Hill Foundation. “He has an energetic personality that is full of enthusiasm. He is dedicated to sharing Hill’s work in his own country, and I have no doubt that we will continue to see more good things coming from his efforts and from Indonesia in the near future.”

Mohammad Azhar believes that the unique wisdom and teachings within the Napoleon Hill programs can be distilled and embedded within the Indonesian culture that will result in transformational change by applying the principles of success. He credits the program for transforming him into a person with strong determination and positivity as he experienced much personal growth after completing the Science of Success certification in 2005 offered by the Foundation.

He became a serial entrepreneur using concepts garnered from Napoleon Hill programs. He started a healthcare business named D. Acacia Pte, Ltd. in Singapore in 2016. The company grew exponentially in less than three months. His greatest achievement was the sale of two properties valued at more than $9 million in 2009, within 24 hours of listing the properties.

Apart from his healthcare business, Mohammad Azhar has served as a lead trainer for the licensed agency the Art of Marriage as a way to contribute and give back to society. The agency is now the most successful pre-marriage counseling agency in Singapore.

Mohammad Azhar holds an international diploma in teaching and training, and a diploma in supervisory management awarded by the Productivity Standard Board Singapore. Recognizing the value of higher education, Mohammad Azhar is currently working on completing a masters in human resources development by 2021 in the U.S.

First published in 1937, “Think and Grow Rich” has sold millions of copies worldwide and continues to appear on the list of top business books. In this classic on personal achievement, Hill introduced the concept “whatever the mind can conceive and believe the mind can achieve.” Seventeen principles from Hill’s philosophy of personal achievement include cultivating a burning desire, faith, and persistence in the attainment of goals. Hill’s writings are still must-reads for business professionals.