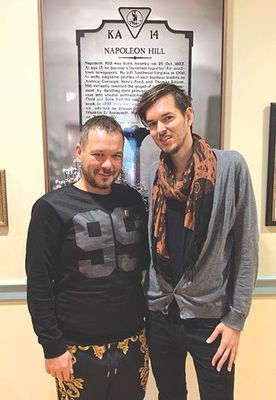 Hundreds of international visitors frequent the doors of The Napoleon Hill Foundation each year located on the campus of The University of Virginia’s College at Wise. Last week’s visitors were no different except for choosing to join the ranks of the Foundation’s international licensees granting them the rights to share Hill’s philosophies to their native country of Serbia.

Sasha Riess and Vedran Popovic, both of Serbia descent, spent a week at Foundation archives with CEO Don Green discussing ways to promote the Foundation’s goal of “making the world a better place,” and hashing out details on how to best promote Hill’s philosophies and legacy in Serbia.

“Serbia is a very small country with a very rich and turbulent history,” said Riess. “As a nation we have been struggling for many decades. The traumas and wounds of the past are continuing to keep a tight clutch making the present times very challenging. However, the challenges represent the seeds of equivalent successes, as Napoleon Hill would say.”

Riess went on to say, “My vision is to apply the philosophy of Napoleon Hill on a national scale to Serbia. Through his principles, we can begin to rebuild ourselves, our communities, and ultimately our country as a part of the world. I already see my Serbia, in times to come, as a place of great prosperity and abundance.”

Sasha Riess started his career three decades ago handling and grooming show dogs. His path led him to the ring, where he won countless international championship titles. His show dogs were coveted all over the world. Gaining knowledge and experience from being a professional grooming judge, he founded the first Fine Arts Dog Grooming Academy in Serbia in 1998. The core curriculums taught at the Academy are principles from Napoleon Hill’s Law of Success. Riess has also developed a premium line of dog care products designed with doggie moms and dads in mind named Pure Love and Harmony.

Napoleon Hill was born in poverty in a one-room cabin on the Pound River on Oct. 26, 1883.  From these humble beginnings, the Wise County native became an advisor to presidents. During the early 20th century, Hill interviewed the nation’s most successful business leaders, including Andrew Carnegie and Henry Ford.  From those interviews and more conducted over 20 years, Hill compiled his eight-volume set “The Law of Success,” a collection of the philosophy of individual achievement.  He later condensed his research to compile “Think and Grow Rich,” often called one of the most important motivational books ever written.

First published in 1937, “Think and Grow Rich” has sold millions of copies worldwide and continues to appear on the list of top business books.  In this classic on personal achievement, Hill introduced the concept “whatever the mind can conceive and believe the mind can achieve.”  Seventeen principles from Hill’s philosophy of personal achievement include cultivating a burning desire, faith, and persistence in the attainment of goals. Hill’s writings are still must-reads for business professionals.