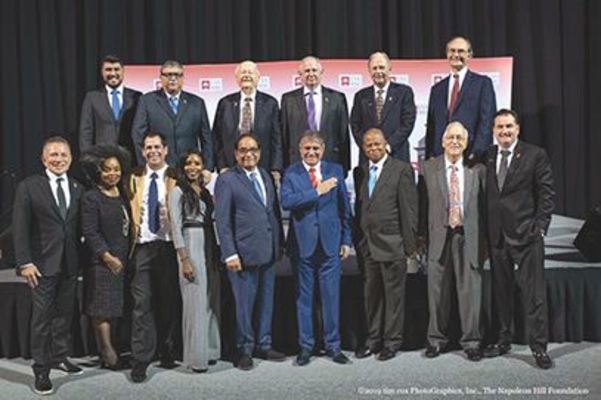 Hundreds of regional high school students and their teachers, area business leaders and college students attended October’s Napoleon Hill Day at the UVa-Wise Prior Convocation Center, however it also was an event that attracted international visitors representing twenty countries.

Albuquerque, Ibarra, Verma, Gold, De La Torre and Qadhi are licensed by the Foundation to teach courses developed from Napoleon Hill material in their respective countries on Positive Mental Attitude Science of Success.

The event, held Oct. 28, organized and sponsored by the Napoleon Hill Foundation, is part of the annual commemoration of the birthday of Napoleon Hill, the Wise County native and author of “Think and Grow Rich,” and other motivational books.

Napoleon Hill was born in poverty in a one-room cabin on the Pound River on Oct. 26, 1883.  From these humble beginnings, the Wise County native became an advisor to presidents. During the early 20th century, Hill interviewed the nation’s most successful business leaders, including Andrew Carnegie and Henry Ford.  From those interviews and more conducted over 20 years, Hill compiled his eight-volume set “The Law of Success,” a collection of the philosophy of individual achievement.  He later condensed his research to compile “Think and Grow Rich,” often called one of the most important motivational books ever written.

First published in 1937, “Think and Grow Rich” has sold millions of copies worldwide and continues to appear on the list of top business books.  In this classic on personal achievement, Hill introduced the concept “whatever the mind can conceive and believe the mind can achieve.”  Seventeen principles from Hill’s philosophy of personal achievement include cultivating a burning desire, faith, and persistence in the attainment of goals. Hill’s writings are still must-reads for business professionals.