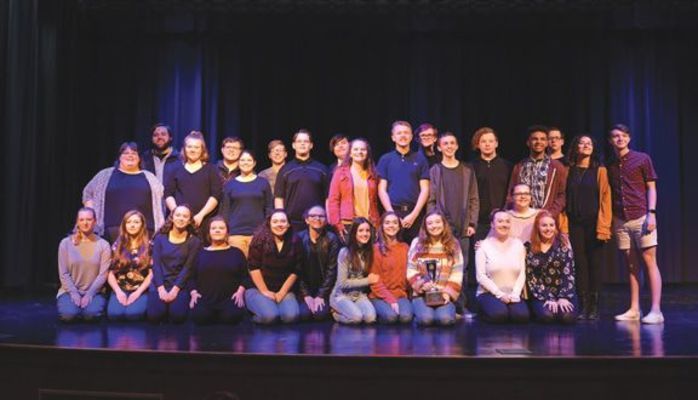 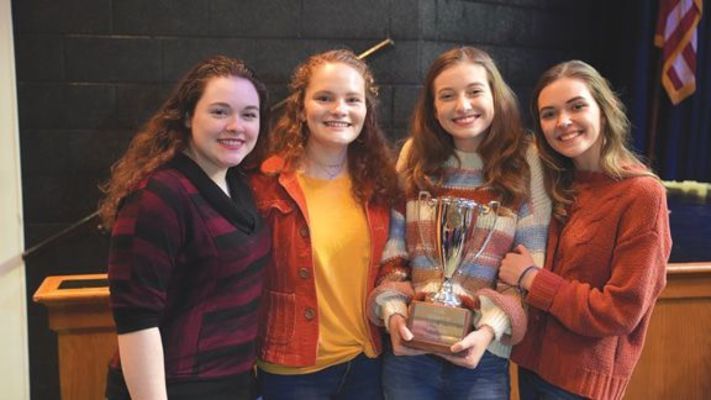 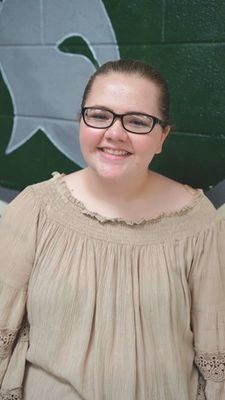 Katie Levy experienced a severe ankle sprain after practice on Tuesday before the competition but Levy refused to be denied.
Previous Next

With every new year, new challenges arise. This was particularly true for Eastside High School’s One Act Team when a new season began late this Summer. Gone was the talented group of seniors with the likes of Kailey Kyle, a record-setting VHSL competitor with the most outstanding actor awards ever. In total, seven graduated students have moved on to universities and careers, leaving many vacancies to be filled.

Fortunately for Coach Shane Burke, he has been grooming underclassmen for years to rise to this challenge. With only three seniors on the roster this year, the Spartans arrived at Coeburn Middle School early Saturday morning determined to not let their coach and their community down. For the second year in a row, Coach Burke has written and directed an original play, which is almost unheard of in competitions. Last year’s “The Light Princess” was well received and loved by audiences everywhere it was performed. It won the Spartans a fifth straight VHSL Division 1 Title. Burke first conceived the idea for this year’s competition piece, “The Swan Queen of Berlin County” months ago, but bringing it from a concept on paper to the stage is always a challenge.

The Spartans put on another great performance on Saturday. Teams from seven district schools assembled to compete for the Region 1D Title. Several schools brought strong shows to the stage with talented performers who captivated the audience with their skills. At the end of the day, the Spartans captured the Sectional Title over a talented John I. Burton team and both schools will advance to the Super Regions round on November 9. Burton’s team performed a beautiful and touching rendition of “The 146 Point Flame” and will again be strong contenders for the Super Region title.

Of the seven outstanding actors recognized by judges on Saturday, six were from either Eastside or Burton. Winners from Eastside were: Olivia Adkins, Sarah Burke, Jillian Hall and Hadassah White. Winners from Burton were: Noel Shamiyeh and Dasanye Smith. In addition Malik Jallow from Eastside and the entire ensemble from both schools were recognized with honorable mentions.

When asked about what makes this show special, Burke said, “I think this show emphasizes the details more than most we have done. The ensemble is telling the story as much as the principle actors are. There are many layers to peel back in this show, and our kids do that beautifully. I want our students to know that I am proud of their efforts. We still have work to do as we continue into this season, and I know they will pull together and work hard.”

Katie Levy, a junior from St Paul, experienced a severe ankle sprain after practice on Tuesday before the competition. After weeks of preparation and rehearsal, Levy refused to be denied. Determined to fight through the pain, Levy was able to compete with her teammates on Saturday, and she delivered her lines beautifully in spite of her injury. “We have worked so hard these last few weeks,” she said. “I’m proud of my teammates and I can’t wait for the next round.”

Although the competition is not judged on technical elements, teams still use lights, sounds and other effects to help tell the story. “It’s an integral part of the package that helps to direct the attention of the audience,” Volunteer Technical Director Heather Marchant explained. “Lighting can help to create mood and atmosphere.” Several students who help bring the story to life are never even seen on the stage, but their hard work is just as important to the final product.

The next round for Eastside will be the Super Regions event, held at George Wythe High School on November 9.